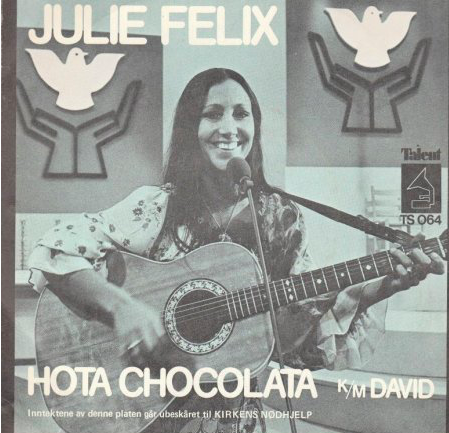 A Santa Barbara native who was a leading figure in the folk music boom of the 1960s, Julie Felix was more than just a singer and songwriter. Inspired by the Beat Generation novel On the Rock, aged 24 she set off on a hitchhiking adventure through Europe, fortuitously meeting poet Leonard Cohen, becoming the girlfriend of Beatles vocalist Paul McCartney, and singing the songs of Bob Dylan.

“Fate whisked me along,” she said recently looking back on her international music career spanning more than half a century. In the United Kingdom she became a household name, TV star and Top 20 recording artist. While she gained more accolades on the other side of the Atlantic, including being heralded as “Britain’s leading lady of folk” by The Times, and spent most of the last decades living in Europe, she remained proud of her American Rivera upbringing.

Born on June 14, 1938 in Santa Barbara, she gained her love of music and connection to the land from her parents, who both had Native American blood. Her mother, an American with Welsh heritage, often sang the ballads of Burl Ives, while her father was a Mexican mariachi ensemble musician who played guitar and accordion. Her father sometimes would sing Mexican songs into the early hours of the morning. By age seven she had written her first song, about pixies.

Being brought up in a devout Catholic household, Julie was inspired by actress Loretta Young’s performance in the movie Come to the Stable to consider a vocation as a nun, though in her early teens after watching the female pirate captain in Ann of the Indies her aspirations also including being a sword fighter.

After initially learning to play the four-string ukulele, her father taught her to upgrade to the six-string guitar, and she starting singing at beach parties and coffee houses, though she was more interested in acting on stage. Julie studied drama and speech at UC Santa Barbara, on the side singing in clubs around town. She recalls a Santa Barbara City College student fan a few years younger than her pestering her about guitar chords. It was David Crosby, who went on to form the Byrds and Crosby, Stills & Nash.

By her mid-twenties, after working as a sports mistress at a special needs school, the theater major realized she had limited prospects in the American entertainment industry. In 1962 with $1,000 in savings and Jack Kerouac’s On the Road in her duffel bag, she travelled with her guitar and a friend across to New York, and took a boat to Europe. On the bohemian Greek island of Hydra she met Canadian Leonard Cohen, who would borrow her guitar. She is credited with helping him turn his poems into songs.

When she eventually arrived in the U.K., like her contemporary Paul Simon, Julie was “discovered” by David Frost. After featuring on his satirical show (she sang “That’s No Way To Say Goodbye” with Cohen when he made his TV debut, she got her own primetime show on BBC Once More With Felix, the first broadcast in color on TV, which included guests The Bee Gees, The Kinks, Fleetwood Mac, and The Hollies.

She became the first solo folk performer to sign with a major British record label. Despite her Californian accent, and even though she sang the songs of Americans Woody Guthrie, Bob Dylan, and Paul Simon, she was claimed as “Britain’s answer to Joan Baez,” a fellow American she was sometimes mistaken for.

As free-spirited as the times she lived in, Julie had a secret affair with Dusty Springfield and was one of Paul McCartney’s girlfriends briefly — it is said he sang “Strawberry Fields Forever” to her before it was first performed publicly. She was arrested in 1968 at Heathrow airport for possession of cannabis.

The performer with dark, long hair falling over her face, a strong, engaging voice and charming manner is best known for her versions of “Deportee” and Paul Simon’s “If I Could,” and she recorded a double album of Bob Dylan’s songs, but she wasn’t just a singer of protest songs. She had a deep concern for the world, the environment, and its people, and was involved in many humanitarian causes for women’s rights, refugees, and victims of oppression, including projects to end the military use of landmines in Third World countries, working with Freedom From Hunger in Kenya and Uganda, and as an ambassador in the Middle East and Africa for Christian Aid.

She returned home to California in the 1980s and 1990s, to be by the Santa Ynez mountains and Pacific Ocean, exploring the “Aquarian arts” and continuing to tour, record, and perform, even teaming up with musicians she’d performed with 50 years before, right until her death on March 22, at age 81 in a small village in England.

She once said that music is like breathing to her, and she was grateful at being able to make music and share it with others.

For generations of children, she is the voice behind the song “Going to the Zoo.” Julie leaves a deep legacy not just musically but in her ideals and how she strived to make a difference. In a divided world, she saw no divisions, only an unrealized global consciousness, that we are all one, all children of the universe.